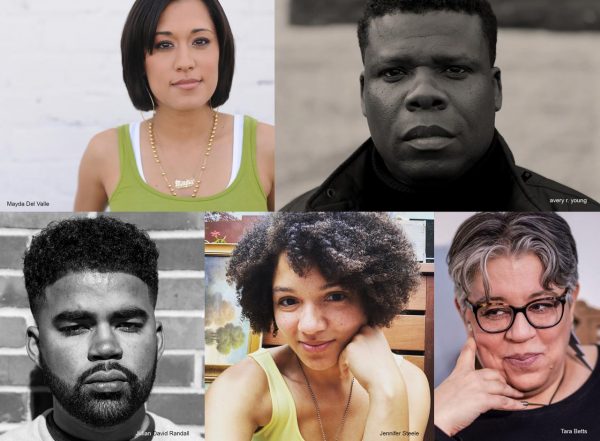 Tara Betts is the author of two poetry collections, Break the Habit, Arc & Hue, and the forthcoming Refuse to Disappear. She also coedited The Beiging of America and edited a critical edition of Philippa Duke Schuyler’s Adventures in Black and White. Her work has appeared in The Breakbeat Poets, The Long Term, Essence, POETRY, and many other publications. Betts is Poetry Editor at Another Chicago Magazine and The Langston Hughes Review and the Lit Editor at Newcity.

A proud native of Chicago’s South Side, Mayda Del Valle got her start at New York City’s legendary Nuyorican Poet’s Cafe, where she was the 2001 Grand Slam Champion and went on to win the 2001 National Poetry Slam Individual title, becoming the youngest and first Latina poet to do so. She has been featured in Latina Magazine, The Source, The New York Times and was named by Smithsonian Magazine as one of “America’s Young Innovators in the Arts and Sciences. In May of 2009 Del Valle was invited to perform at the White House for President Obama and First Lady Michelle Obama.

Julian David Randall is a Living Queer Black poet from Chicago. He has received fellowships from Cave Canem, CantoMundo, Callaloo, BOAAT, Tin House and the Watering Hole. He is the recipient of a Pushcart Prize and winner of the 2019 Betty Berzon Emerging Writer Award from the Publishing Triangle. In 2015, he was named the National College Slam Best Poet. His poetry has been published in New York Times Magazine, Ploughshares, Sixth Finch, Tin House and POETRY. Randall is the author of Refuse, winner of the 2017 Cave Canem Poetry Prize, and a finalist for the 2019 NAACP Image Award in Poetry.

Jennifer Steele is a Chicagoan, educator, and the author of the 2018 chapbook A House In Its Hunger. She is a 2015 Callaloo Fellow and 2016 Poetry Incubator Fellow. She is the founder of Revolving Door Arts, a nonprofit organization and press dedicated to empowering creative community and evolving the artistic craft of young, new, and emerging writers. Steele is the inaugural recipient of the 2019 Lucille Clifton Creative Parent Award from Raising Mothers Magazine and her work has appeared in Hypertext Review, Pittsburgh Poetry Review, Another Chicago Magazine, Callaloo, Columbia Poetry Review, and others.

Interdisciplinary artist avery r. young is an award-winning teaching artist who has been an Arts and Public Life Artist-In-Residence at the University of Chicago. In the foreword of his most recent book neckbone: visual verses, Theaster Gates called him “one of our greatest living street poets…one of the most important thinkers on the Black experience.” Mr. young’s poems and essays have been published in Cecil McDonald’s In The Company of Black, The BreakBeat Poets, The Golden Shovel Anthology: New Poems Honoring Gwendolyn Brooks, AIMPrint, and other anthologies. His work in performance, visual text, and sound design has been featured in several exhibitions and theatre festivals—notably The Hip Hop Theatre Festival, The Museum of Contemporary Art, and American Jazz Museum.